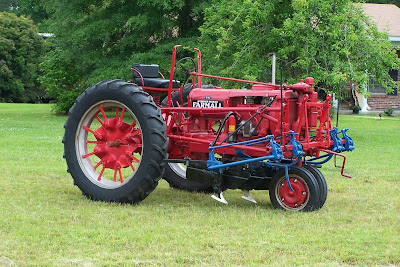 “This is my daddy’s F-14 Farmall. He bought it from John Schnicke Implement Company in Meadow Grove, Nebraska in 1939, September of ’39, 3 months before I was born. This tractor came out with dual tires on the rear. I believe they were 7 x 44, and we took those off and put 40 inch single tires on it in about 1947 after we moved to Missouri. One of my brothers borrowed the back tires off of it to put on his F-12 and put his F-12 steel wheels on it, and that’s the way it was when I got it, but thank goodness they sent the old wheels with it.

I rebuilt the engine on this tractor. Daddy rebuilt it in 1952, as best I recall, and it had been run just a few hours after that, so the bottom end was in good shape. The engine was stuck. I drove the piston sleeves out with a slegehammer and looked at them, and they looked just like C Farmall piston sleeves. I had a brand new set of those and I put those in and they fit perfect. In looking at an old parts book later on I found out that the piston sleeves, rod-bearings, and the main-bearings are the same as the C Farmall. Now, you’ll notice it has a rag joint on the steering. That’s a shock joint. The F 12, the steering shaft came straight back and it set a lot lower. It was unhandy. On the F 14 they raised it up and they put this rag-joint in it. I went to CarQuest and they had exactly what I needed for a late-model pickup. It fit perfect.

What does that mean “road gear?” (Missy)
"That means instead of running 3 miles an hour top speed, it runs 12. I’ve driven it many miles on the highway.

Another story on the F 14 is I got it in August of ’07. My oldest brother Bobby had terminal cancer so I had to get things rolling real quick if he was going to get to see a picture of it. And he did get to see a picture of it. I don’t know if he really realized what he was looking at or not, but…
Oh, and another thing about that. Daddy bought it from John Schnicke. I called my brother Paul. He couldn’t remember who Daddy bought it from. I called my brother David. He couldn’t remember. So I called Valjean King, our landlady up in Nebraska, who we go by and see every year. She is nearly 90 years old now, just a sweet lady. And she said, “Well, Gary, that was John Schnicke…Let me check the phone book and make sure I’ve got the spelling right.”