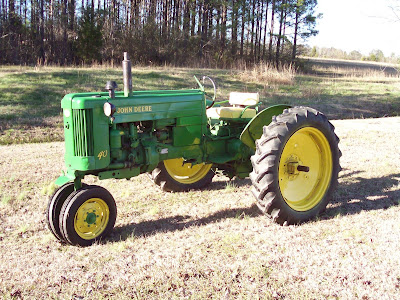 "That was Jack Parra’s.  It’s a 40 and they only built the 40 I think for one year, and then they built the 420.  So that would make it a ‘53 model.  Jack had a Super A Farmall that was the last year they were built.  But he wanted something with a 3-point hitch.  Ray Dove had this 40 John Deere, and they traded.  I think they traded even up.  Both of the were approximately 1953 models.  Billy Welch has that Super A Farmall now, and he has completely restored it.  I overhauled the little John Deere and repainted it and put new inner tubes in both back tires.  I put a new set of front tires on it, and it is a fine little tractor now.  Bought new side panels for the battery.

Jean (Jean Parra - Jack’s sister) gave it to Dale (Parra).  Dale took it home and never cranked it again.  Just a few months before Jean passed away, 2 or 3 years ago, Dale mentioned to her that I’d like to have it, and she said, “Well, let him have it.”  So I reworked it, and Marty drove it in the Christmas Parade that year.  Two weeks after I got it, he drove it in the Christmas Parade, that’s how fast I hustled."